Latin America is now the center of the COVID-19 pandemic, with no peak in sight.

“You can recover from a drop in the GDP, but you can’t recover from death.” With that grim but straightforward logic, Argentina’s President Alberto Fernández instituted a tough lockdown early in the pandemic to limit the spread
of COVID-19.

When the pandemic first hit, Argentine officials took rapid and decisive measures aligned with recommendations of the World Health Organization (WHO) and its regional office, the Pan American Health Organization (PAHO), which initially flattened the curve
and saved lives.

Currently, the number of new cases is accelerating in the country and topped 100,000 in mid-July, which is wintertime in the Southern Hemisphere. Yet, public pressure is growing to continue opening up the country, already in recession before the pandemic
even started, and now facing a projected 7.3% contraction in GDP that could see 45% of the population living in poverty.

At the start of the pandemic, Argentina stood out in the region for its no-nonsense, quick response to the virus. The country announced its first case on March 3, when a man in his 40s tested positive after returning to Buenos Aires from a trip to Milan.
Less than two weeks later, President Alberto Fernández decided to close the country’s borders for 15 days to non-residents, and shortly after, mandated a nationwide quarantine.

“They pounced on it,” recalls PAHO/WHO Representative to Argentina, Dr Maureen Birmingham. “They were ready for the initial importation of cases and they’re really proud of that.”

Prioritizing health may seem like a logical choice for some countries, but shutting down the country — and essentially, the economy — was seen as a risky move for a newly elected president presiding over a fragile economy. President Fernández
inherited an inflation rate of more than 50% and high sovereign debt, with a third of his country already living in poverty.

Despite the challenging context, he showed that he did not believe in the false dilemma of choosing between health or the economy. He was convinced that saving lives was the more immediate imperative, so he led a decisive strategy to contain the pandemic
while preparing the health system, scaling up testing and tracing, and extending social protection measures to reduce socioeconomic hardship.

At the same time, there was considerable community engagement to implement the measures, particularly given the COVID-19 situation at that time in Italy and Spain where many Argentines have strong family and cultural ties. In addition, the President valued
having a broad-reaching consultative process in place. Before each major decision, he first consulted with public health experts and established dialogue at the national level and with provincial governors, across political parties, with trade unions
and with actors in the private and public sectors. This helped ensure consistent, coherent communication from both national and local leaders, which contributed to the public´s understanding and acceptance of the lockdown measures.

“They were a new government, having taken office in mid-December 2019 with a completely new structure and new people at all levels, and were just starting to familiarize themselves with their new job and each other when the pandemic hit,”
explained Dr Birmingham, who has worked in her role in Argentina for almost 5 years and through several leadership changes. “So one role PAHO/WHO played was to help rapidly bridge the gap in institutional memory from the previous administration
and serve as a neutral voice during the transition.”

Leveling the response across the country

The constitution guarantees universal health coverage in Argentina, however, its health system is highly decentralized and fragmented, resulting in governance challenges, considerable inefficiency, and variabilities in access, equity, and resources in
each jurisdiction.

By mid-July, in the 24 subnational jurisdictions in Argentina, around 90 percent of cases were from the city and province of Buenos Aires where more than 50% of the country’s population resides. Of the remaining jurisdictions, roughly half were experiencing only sporadic cases (or no cases) and the other half were experiencing more
localized community transmission with some recent acceleration associated with the relaxing of quarantine measures.

Argentina has well-trained human resource capacity in the health sector, which proved vital in its response to the virus. PAHO/WHO accompanied the government in the development and issuance of real-time guidance tailored to the Argentine context; helped
host webinars for relevant personnel from all provinces on key topics, including laboratory methods, surveillance, contact tracing, infection prevention and control; and provided training on tools to support the ramping up of health services.

Of particular concern was the need to maintain essential services within the COVID-19 context, such as vaccination, mental health, maternal and child health, reproductive and sexual health, as well as continuous care for people with chronic conditions
such as cardiovascular disease, cancer, chronic lung disease, diabetes and HIV. PAHO/WHO also helped develop specific protocols for high-risk populations, including older people, those with chronic conditions, as well as populations in vulnerable
situations.

PAHO/WHO is also working with Argentina to facilitate access to critical supplies where there is a global shortage, particularly personal protective equipment and laboratory diagnostics.  This has involved working closely with the Global COVID-19
Supply Chain Consortium and the Argentine authorities so that when scarce supplies become available, they could be rapidly purchased.

“This has clearly been a case of “learning-while-doing” in an exceedingly complex global supply and logistical situation for both the global consortium and the country,” said Dr. Birmingham. “Argentina had to make ultra-fast
decisions and payment when life-saving supplies and equipment became available or risk losing their chance to purchase it.”

The information and innovation front

Making sure that people are getting the right information in the pandemic has been another important front in Argentina’s fight against COVID-19. To combat the “infodemic” of public misinformation and ensure accurate reporting, PAHO/WHO
leveraged its close relationships with the media community, publishing several articles and, together with national and provincial authorities, ran training sessions for journalists to increase their understanding of COVID-19. 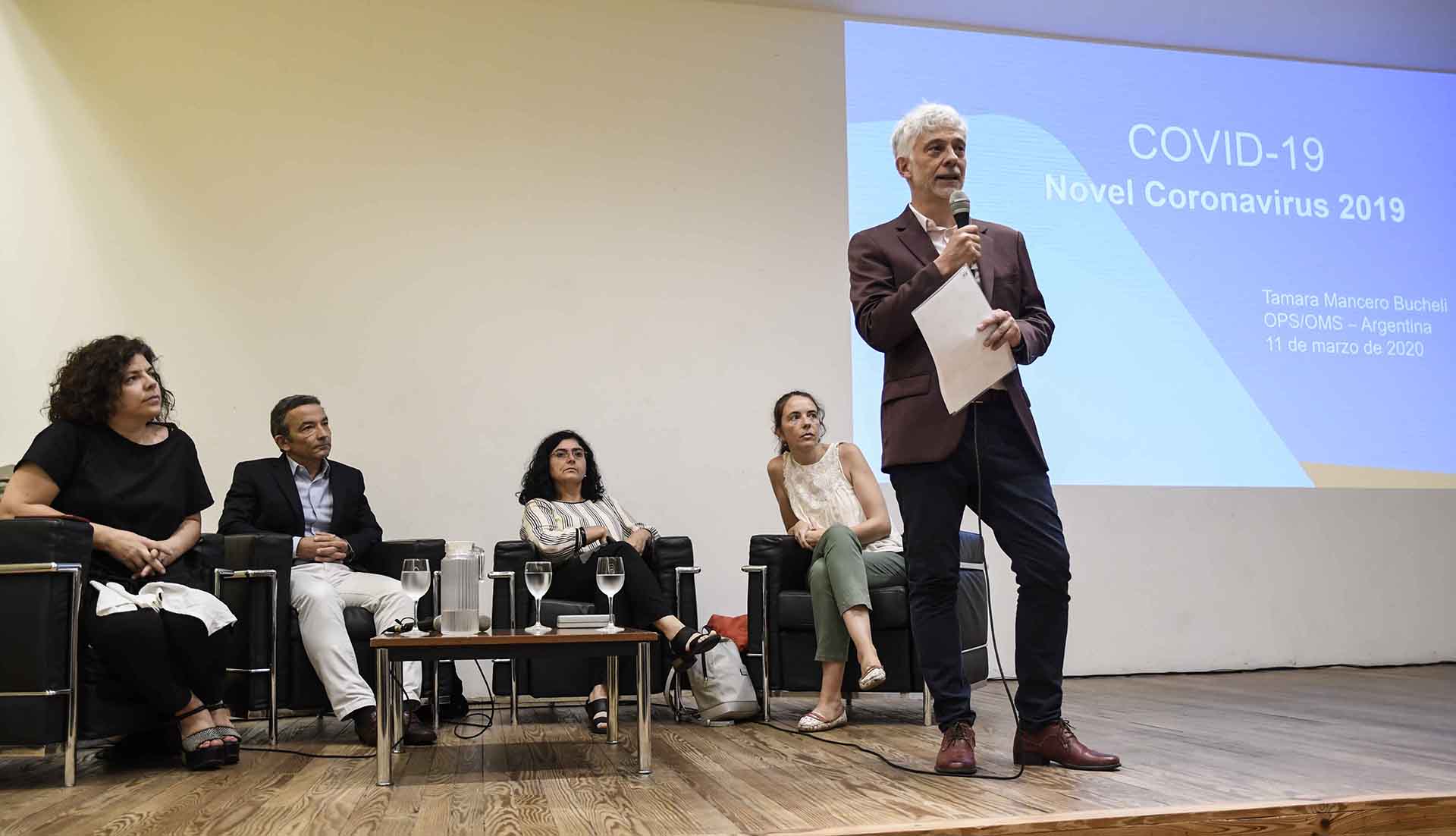 The PAHO Argentina team also prepared content to help locals understand the new normal. Topics covered include: the safe return of construction workers to a sector that saw a
76% decline in April alone; infection prevention and control in difficult environments such as prisons;
how to manage stress during the lockdown; the importance of blood donation, given an 80% drop in donations; the food system in the context of the pandemic; and perspectives on “recovering better” in a new normal. 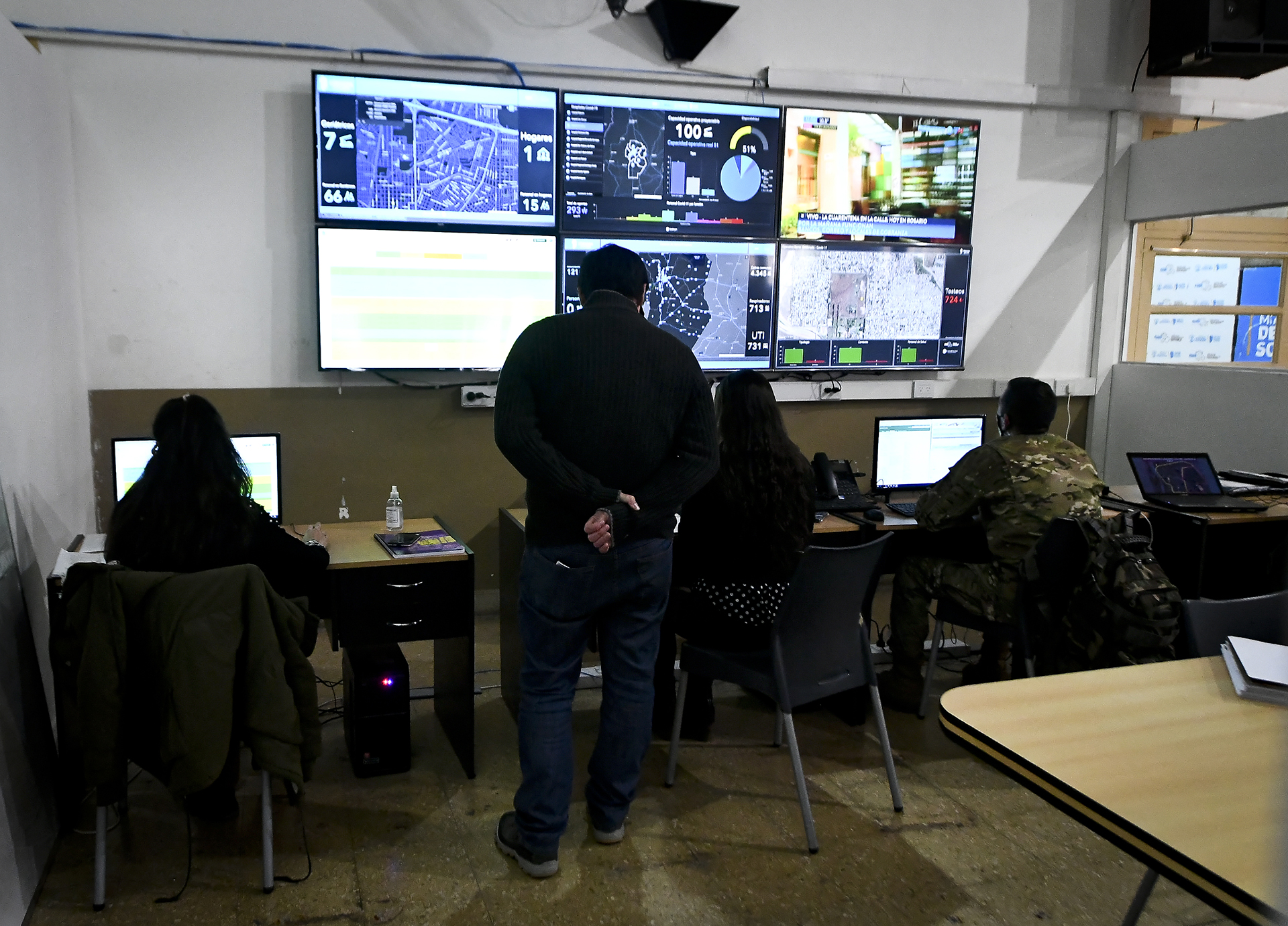 Data monitoring in the emergency operations center in the province of Córdoba (Source: WHO Argentina)

“I think that an important, but underestimated role of PAHO/WHO in Argentina has been the strong information management and communication of interim guidance,” said Dr Birmingham. “Also important has been the exchange of experiences
between and within countries to encourage local ´genius´ and innovation, because the local authorities and community often know best how to implement something, once they have a clear understanding of the ´what´ and the ´why´.”

Argentina’s strong research and innovation capacity has also come into play to contain the pandemic, and PAHO/WHO is actively facilitating aspects of this in diagnostics, health technology, therapeutic agents and vaccine development.

A challenging time ahead

Like the rest of Latin America, Argentina still faces several challenges as it fights COVID-19, as the virus is now accelerating in certain parts of the country, a testament to the virulence and persistence of the virus despite Argentina’s early
and decisive measures. Dr. Birmingham says that the urgent priority now is to continue scaling up testing and tracing activities to place maximum pressure on the virus, especially given recent decisions to gradually lift lockdown measures to allow some resumption of socioeconomic activity.

“This needs to be accompanied by continued strong community engagement to do its part in hygiene and social distancing. We know this comprehensive set of measures work, when done well and sustained to suppress new chains of transmission, because
it has already worked in several countries that had intense transmission,” said Dr. Birmingham. “With the human talent and experience in health in Argentina, I am convinced that Argentina can find a way to do it. At this point, without
a vaccine, it is the only alternative to avoiding uncontrolled transmission, because continuous lockdown is not sustainable.”

France to impose quarantine on arrivals from Argentina, Brazil, Chile and S. Africa